Bhumi Torchbearers of the Year 2009 BHUMI has changed a lot from the days when ten of us used to have meetings at Gandhi Mandapam to now, holding meetings at open air auditoriums. This has not been made possible without Bhumi’s greatest asset… our volunteers. Last year we had over 130 volunteers who contributed for at least a month. Who were the most exceptional of them all?

While every volunteer is a torch bearer of BHUMI, the organization is proud to recognize these five who have walked that extra mile – towards Changing Today… Changing tomorrow and confer the Torch Bearers of the year award for 2009.
Akhila Hari
1) She doesn’t know Tamil well. But, to ensure a strong rapport was established in the initial phase, she made extra efforts to learn Tamil – this was very inspiring
2) She has always added components to ensure her classes are fun and interesting – like printing her own flash cards, preparing handmade games. Her scrabble game won the “most innovative idea” poll on orkut. These handmade board and letters were also circulated amidst all volunteers from Dr. PV Rao School. To ensure good class strength, she maintained a well-made attendance register which was marked both before and after class.
3) She was always ready to substitute for volunteers from Sunday. Due to rains, towards the end of the academic year, when children had school on many Saturdays. She didn’t want to miss teaching her children. So made it a point to attend Sunday classes. We had to make her a permanent Sunday volunteer, since her credits were bouncing off the limit!!! Last year, she had the highest number of credits, almost double of any of the existing MAD volunteers.
4) For her effective contribution to classes @ Dr. PV Rao School: Good class control and discussing issues faced in class, with her project head. 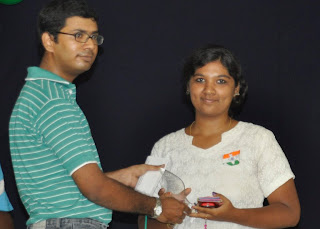 Akhila is an example of how an ideal “teaching” volunteer in Bhumi, specifically MAD, should be! Bhumi is very proud of her consistent and dedicated contribution.

1) Initially, had a very hard time in getting her children to understand the need to learn. But she roped them in by preparing materials, made copies of lots of activities, read out stories every week, and now, children look forward to her classes!
2) She openly discussed issues faced in class, with her project head.
3) She showed high interest, and participated regularly in Think Green activities too.
4) For her enthusiasm in trying to implement the “books from waste” programme where volunteers were expected to bring recyclables from home sell it off and purchase some storybooks for the children.
5) For her interest in trying to implement workbooks for the children as part of the MAD programme. 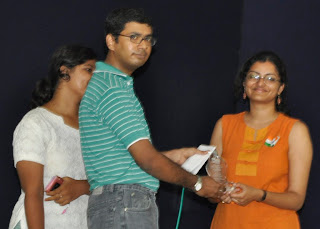 For her consistent contributions to MAD, Think Green and overall interest in Bhumi.
Vaishnavi Srinivasan – The Karate Kid
1. She continues to play a major role in stabilizing and strengthening the Knowledge Management team of the Career Counselling project. Her role has been inspirational to others in this team.
2. The responsibilities that she has taken till date have been addressed with utmost dedication, perfection and above all in a timely fashion
3. Her contribution works as an indirect spark that will light the lives of many students tomorrow
4. Her equally dedicated contribution and effective handling of classes in Kanini at WET, Pallavaram, Community centre is worth a mention
5. Her role in Kanini admin team and panel member has been pivotal 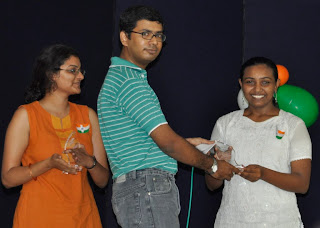 For her consistent and dedicated contributions to Career counselling, Kanini and overall interest in BHUMI.

1. His abilities as Kanini center head are commendable. Through his dedication, he was able to inject hope in students which helped stabilise the student turnout at his centre.
2. He played a major role in taking Kanini to more children in Thiruvallur district.
3. He was the Joy to the world coordinator at Wipro and was nodal in fulfilling simple wishes of many students
4. Although a resident of Ambattur, he never missed any General or Kanini meetings which are usually held in the heart of the city. His contribution in general Bhumi discussions have been invaluable.
5. The ‘One man Army’ of Thirumulaivoyal who handled four different sessions for more than 40 students in a weekend! 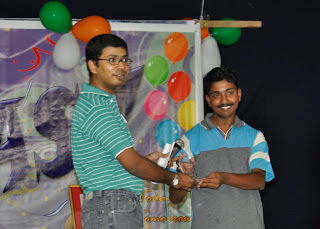 For his consistent and dedicated contribution to Kanini, Joy to the World and overall interest in BHUMI

1. She has been the primary syllabus designer for Kanini
2. Exhibited immense character by handling Kanini classes at both NEST, Thirumulaivoyal, Community centre and Balamandir Orphanage with great responsibility when there was lack of volunteers at both centres [Topographically, they’re 30 kms apart]
3. Her skills as a good teacher helped stabilize classes at Balamandir orphanage.
4. For making an effective contribution towards Joy to the World
5. Her charming and friendly nature makes her very popular among volunteers and students

For her enthusiasm and energy level in structuring and stablising the Kanini project. 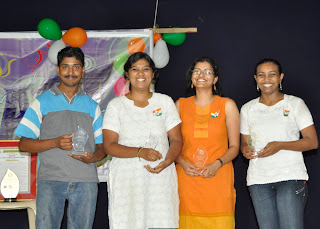 Bhumi is proud to confer the Torchbearer of the Year Award 2009 to these five Bhumians for their commendable contribution towards Changing today… Changing tomorrow! 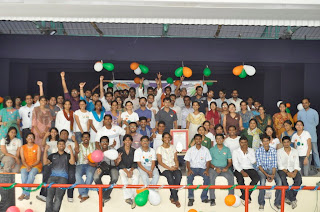