Every Bhumian is a changemaker, on Bhumi’s fourth birthday, 15 August ’10 we recognised the most outstanding changemakers for 2009-2010. Every Bhumian is a Torchbearer too, but, there are an exceptional few who make every Bhumians extremely proud – those who have and continue to take the Bhumi flame higher and higher, Bhumi’s torchbearers of 2009 – 2010.

1. Joined Bhumi in 2008 at our very first orientation
2. An incredible teacher who is envied for her class control, and admired for her weekly lesson plans
3. A helpful mentor who shares great inputs with her team
4. Has also been playing an extensive role in bringing in new volunteers from colleges and companies across the city
5. Through her contribution for the Information Desk team at Siragugal 2009 and 2010, her skills and efficiency to handle tense situations and fire fight unexpected issues were made evident
6. An ideal MAD volunteer and team player. Ensures pre and post class interaction with her counterpart, and ends every class spending time at CCD, Pallavakkam with her team!

Coffee addict, Aruna Muthusamy – You’re amazing! We salute the teacher in you. We salute your spirit to do more, despite busy schedules at work. We wish you the very best for your future endeavours – which includes marriage too!! 😉

1. Even though she joined Bhumi in 2009, she has been working from behind the scenes right from 2007.
2. Incredibly versatile, her experiences in teaching have added great value and inputs to MAD this year, as both a mentor and a trainer.
3. The rapport she shares with her counterpart from the other batch MUST be every volunteer’s take away this year.
4. A supercalifragilisticexpialidocious designer; She has contributed IMMENSELY to Bhumi’s kitty.
5. Her work in Siragugal 2009 and 2010 as an event coordinator, and an information desk manager were par excellence.
6. Her thoughtful ideas for games at orientations and gatherings have helped us tremendously.

Jabber mouth, Meenakshi Nandhini – We are blessed to have you!! We salute your patience, passion and involvement towards Bhumi and its operations. We aren’t ready to lose you to France, and sincerely pray that you go places, but. . . Within India!! 😀

1. Laziness is a word that doesn’t exist in his dictionary
2. Dynamic and enchanting. MAD is supremely blessed to have him!!
3. Coordinating operations across five centres, never has he complained about the volume of work entrusted on him.
4. Shopping at T.Nagar till 10 PM. Late nights with heavy boxes and big parcels. His passion was deeply reflected during Joy to the World 2009.
5. He sparkled at Siragugal 2009 as an event coordinator, and dazzled at Siragugal 2010 as a logistics coordinator. 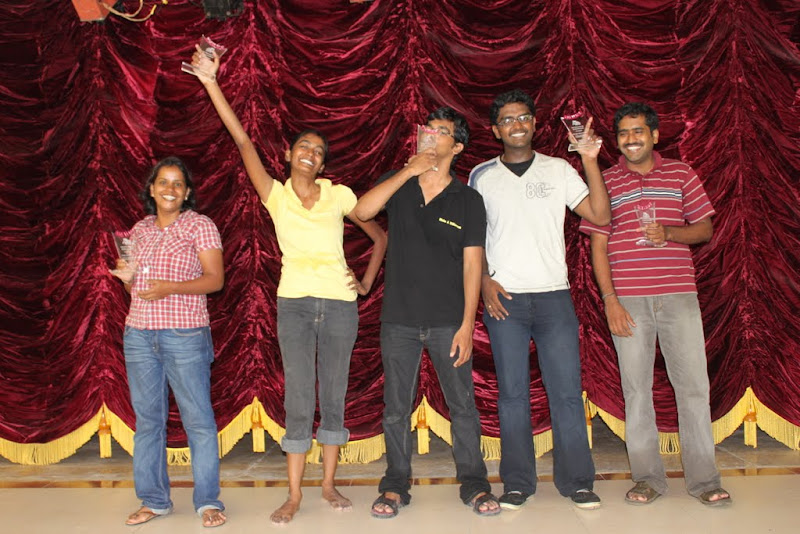 We draw inspiration from many. Anantha Padmanaban, you’re one of those. Bhumi is extremely proud to have you and we hope you go a long way 🙂

1. Joined Bhumi in 2008 at the very first orientation
2. Shares an excellent rapport with his children, and was an active volunteer of MAD last academic year.
3. Was a pillar of strength for Siragugal 2009, Siragugal 2010 and every turning point of Bhumi in the last year.
4. Tried to initiate a Musical Concert as an annual fund-raising activity.
5. Now a very valuable part of the Dronacharya and Ekalavya programme, his colourful personality and abilities are valuable to cement the vision of the project

1. Personification of peace! You actually don’t want to disturb him too often!
2. His patience in handling tasks is the true ingredient to successful implementation of whatever he does.
3. Played a major role in the logistics of Siragugal 2009 and 2010
4. As a key member of Kanini, he currently leads the Course Design team.
5. Also an active volunteer of Dronacharya and Ekalavya, helps in mentoring children.

Mr. Mokkachamy, Sriram Ponnuswamy. Even though you now reside in Bangalore, we have never felt your absence. 🙂