Posted at 18:14h in Ignite by Bhumi 0 Comments
0 Likes
Share

32 children from the Vishwas children’s home, Bengaluru left in two packed vans at 9 AM on 1st October in the hope of flying in gigantic man-made marvels.

As the Indian Air Force celebrated its 79th birthday, the Aircraft and Systems Testing Establishment (ASTE) opened its gates to welcome children from various schools for a static display of aircrafts. Among ASTE’s functions are testing and evaluating airborne systems as per the Air Staff Qualitative Requirements (ASQRs), assisting the developmental programmes of institutions like Hindustan Aeronautics Limited (HAL), Defence Research and Development Organisation (DRDO), Council of Scientific and Industrial Research (CSIR), and Indian Space Research Organisation (ISRO).

There were 14 aircrafts on display which included combat planes, trainer aircrafts, rescue planes and carrier planes. The gigantic planes were brushing each other’s wings and it was a magnificent sight. Every aircraft carried a board that displayed details like its weight, take off speed, altitude, capacity etc. Officials stood beside each of the aircrafts answering questions posed by inquisitive children. It was a delight to watch as children asked questions related to careers in the Air Force.

The children were awestruck to see the size of the aircrafts and asked several questions regarding the different parts of the plane, how it flies, who flies it, so on and so forth. Amidst all this, one request was consistent, “Uncle, can you fly it now?” The officers were very patient in answering the questions and despite the language barrier (none of the officers knew Kannada) tried their best to satisfy the curiosity of the children.

The smile on the little faces grew broader when the officers allowed the children to go inside a rescue helicopter and a passenger plane. Children walked inside the mammoth structure, sat down and relished every moment of it. Their eyes grew wide when they entered the cockpit and witnessed the elaborate setup which controls the flight of an aircraft. They were also allowed to have a closer look at the antennas, transmission systems, additional fuel tanks and missiles.

Before leaving, the staff at ASTE gave out some stickers, a pencil and an eraser to each child along with a handout enlisting career prospects in the Air Force. It was a great experience for the children and I will not be astonished if a few children actually consider this as a career option. Special thanks to Squadron Leader Aakash Chopra for coordinating the visit from start to end. It wouldn’t have been possible without him.

An overjoyed Tejas from class 4 said, “Many aero planes had names like Mirage, Dhruv and Cheetha. You know, there was one plane with my name too!! We went inside a helicopter and an aero plane. The uncle who showed us around gave me a pencil and some labels. Big posters of an aero plane were given to older children. I was very excited and I will not forget this day.”

Even though we couldn’t click pictures at this event, here are some smiles!! 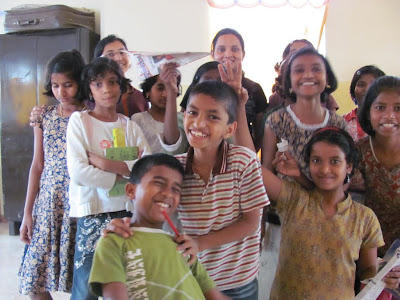