My first class at Bhumi

07 Oct My first class at Bhumi

Two years have gone by, and I have now taught over 70 sessions of Kanini classes in Bhumi. But as the classics say, the first experience always gives us some undeniable pleasure and unforgettable memories that stand out among the rest like the brightest stars.  I am no exception to this universal truth. And just like everyone, I had an amazing ‘first class’ experience at Bhumi.

It was a sunny morning, and although I initially lost my way, I somehow managed to find the centre, which, to my astonishment, was a big temple. I stood outside, new and clueless, waiting for a seemingly important person named Balaji to approach me in that completely strange place. Instead, I was approached by Revathi. Experienced volunteers have the talent to identify new ones with just one look, so Revathi got me with a glance, briefed me on a few Do’s and Don’ts and before I realised it, I was standing right in the middle of some 30 children, who were blinking at me, and giving me the same clueless look I had on my face!

Revathi came to the rescue again; she introduced me as their new ‘teacher’. I had to disagree right away, with the words, “I am not your ‘teacher’; I am your brother (big brother), who will teach you anything you want to know about these computers.” I wanted to break the ice between the children and me, so I initiated a few funny discussions, most of which pulled my own leg! 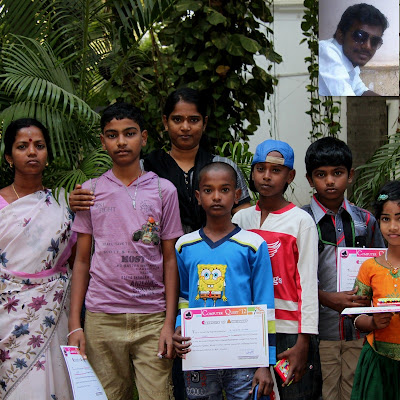 Gopal (inset) & Revathi with children from their centre

The chit chat gradually led to some teaching. As the class progressed, the children proved that my initial assumption about them was wrong; I thought that they would have no knowledge of computers. The session ended as the sun moved on to the west. I finally got to meet Balaji, and my assumptions about him were wrong again, as he was completely different from what I had imagined. After a small discussion with him, I glanced back at the temple as I stepped out. The place did not feel strange anymore. Two years from then, this place feels like a second home to me with my own children 🙂