Six years ago, a small thought to do something for this country led us to an orphanage where we focused on the education of the country’s future. Since then our growth has been steady and a lot has ‘Change’d within Bhumi itself. I remember before our first orientation, my co-founder started the membership number as YYYYXXX, he felt that was enough, this was in 2008! From Jan 2012 till date we’ve added over 6,500 members and our membership numbers go YYXXXXXX 🙂 And, I’m not completely sure that this will hold good forever 😉 For a really long time we never felt the need to expand beyond Chennai, we thought there would ‘always be enough to do in Chennai, why go anywhere else’, but now after Bengaluru, Trichy, New Delhi and Pune, we are glad to announce that Bhumi has begun operations in Mumbai mid-August and we will soon be starting operations in Jaipur and Chandigarh 🙂 ‘All the projects will eventually go everywhere but Siragugal will always be a Chennai thing, how is it possible to even conduct such events at so many places’ how wrong was I!? Bhumi’s Bangalore team executed a near perfect Nakshatra a few days back and I’m sure Trichy and New Delhi will do even better. In Bengaluru, the children were so filled with gratitude and when many of them started chanting Bhumi … Bhumi … Bhumi, I was nearly in tears :’) Every Bhumian holds Nakshatra very close to his heart, but there are a few who shine brighter than the stars above us. We take immense joy in recognising the Shining Stars at Nakshatra 2012.

Everyone thinks that Bhumi is changing the country by contributing to the education of this nation’s workforce, ten years later, over time we have realised our greatest impact has already begun; it’s not the children that we’re moulding the most, but the socially conscious youth who are transforming into Changemakers. Speaking of Changemakers, we decided to evolve the award process further and seek nominations; almost 150 nominations were received with a few receiving multiple nominations. 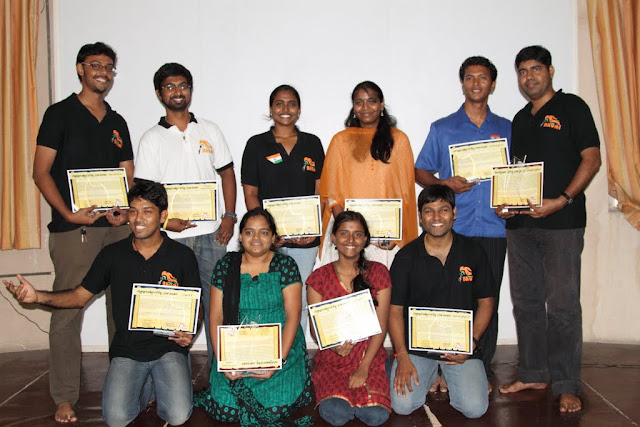 So what do you think sets these people off from the rest of us? Time? Capability? Intelligence? Motivation, probably! Each one of them is different and we cannot ever define a Changemaker or Torchbearer by one quality. These awards are meant not only to recognize the awardees but to inspire those around them, so choose who you want to be inspired by and ‘Lead Bhumi’ we would be more than glad to give away more awards next year 🙂

An interesting Trivia! Out of the 13 Torchbearers awarded till date, five have quit their regular jobs to take up full time responsibilities in the education or non-profit sectors. It gives us the reassurance that we have chosen well 🙂 Exceptional Changemakers continue to be exceptional, Special Mention for:

We are over 800 strong now and we will impact over 7,500 children this year; I shall not venture to set goals and targets for the next few year because I’m sure we would exceed that, but our goals are definitely bigger, we hope to inspire young people in over 50 cities in this country over the next five year, together let’s Change Today … Change Tomorrow.