Bhumi | When we reached for the stars…
Bhumi, NGO, Youth Organisation
1048
post-template-default,single,single-post,postid-1048,single-format-standard,ajax_fade,page_not_loaded,,overlapping_content,qode-theme-ver-9.2,wpb-js-composer js-comp-ver-4.11.1,vc_responsive,elementor-default

When we reached for the stars…

10 Oct When we reached for the stars…

It was a bright beautiful day. We were all eagerly waiting for this exciting day and hoping that it wouldn’t rain. The kids from SISTWA, Saidapet were all dressed up in their neat uniforms ready to spend their afternoon at the Birla Planetarium in Kotturpuram, Chennai.

On arrival at the Planetarium, the kids, although excited, lined up neatly in a line to witness what was in store for them.

We got pushed from the 14:30 show to the 14:00 show in Tamil for lack of seating. So we had to rush to make it to the planetarium show in time. The bunch separated, found seats where available and settled down. The lights dimmed. Scared of the dark and excited, there were shrieking noises all around. Keeping the kids seated was a task for the volunteers. This projection hall had seats facing the “sky”. The huge concave dome, combined with the state of the art projector, created a fake sky with stars and planets orbiting. The kids held their breath as the cosmic world revolved around them – twinkling stars, shooting meteoroids, the rotating solar system and the undulating contours of the red planet, Mars. As soon as the pictures were projected, the kids were quick to name the celestial bodies before the narrator. The kids were in awe as they saw the celestial bodies move and how each planet was shown and explained about.

After the show, we made a beeline to the 3-D theater. We had to wait in queue for a long time but the wait was well worth it. The kids were made to sit in the first three rows and were given the 3-D spectacles. We were seated in a corner ready to see the reaction of the kids when the movie would be played. Lights were dimmed but no shrieking this time. The kids were excited to be experiencing probably their first 3-D movie. There was 10 minute version of Alice in Wonderland being played. Then there were random 3-D images. It was fun to see the kids shove their hands and try to catch the 3-D images. There were many spectacles coming off in regular intervals to check how the movie would be without the spectacles. It was evident that they had a very good experience.

After the show, we made our way to the science center. Eight galleries on themes of Physical Science, Transport, Electronics & Communication, Energy, Materials Science, Life Science, Innovation, International Dolls and Children, with over 500 exhibits, made the visit to the centre, a thoroughly enjoyable and enlightening experience. The kids were spellbound looking at the ball making its way around the maze to explain Inertia. They were especially fascinated by the specimen gallery, where different sea creatures, snakes and even an unborn baby were preserved in formaldehyde. 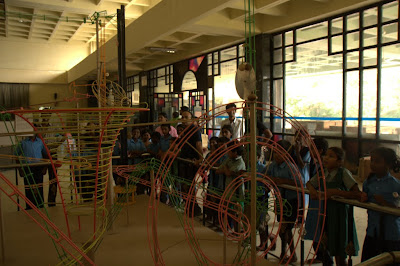 By the time we were finished, it was time to leave. The kids wanted to spend more time and play around the center, experiencing what the various galleries had to offer. Time to thank the volunteers and the warden for their tireless effort to keep a tab on the kids at all times and to ensure that the experience was indeed a one that the kids would cherish for a long time.

One of the kids shares her memories: 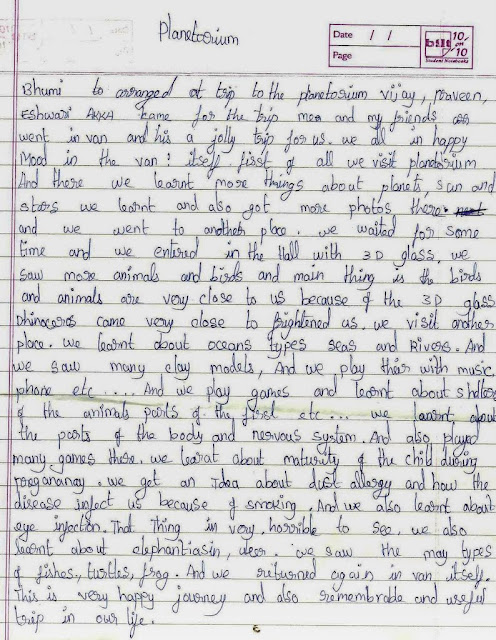